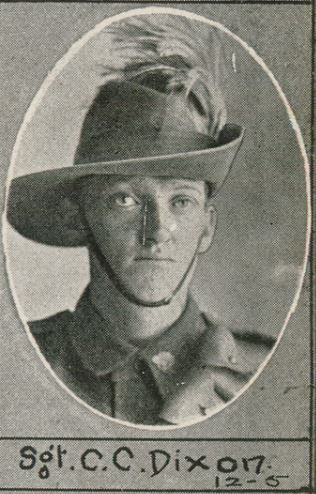 Charles Dixon arrived in Egypt in January 1916 and transferred to the 5th Australian Divisional Trench Mortar Brigade. He joined his new unit in France in June. In January 1917 he became sick with an unspecified ‘debility’ and was sent to Wandsworth General Hospital, returning to his unit in June. In Belgium in October his courageous actions at Broodseinde Ridge earned him the Military Medal. While on leave in Paris after the Armistice, he was admitted to hospital with influenza on 13 December 1918 and died from the disease ten days later.

Military Medal citation: "On the night of 16th October 1917 on the Broodseinde Ridge, a Trench Mortar Brigade party came suddenly under an intensely heavy hostile barrage. A number of the party having taken shelter in a dugout became buried and in danger of suffocation on account of a large shell having struck the roof. Gunner Dixon realising their precarious position immediately went to their assistance and single-handed was successful, in spite of heavy and continuous hostile fire, in extricating four of his comrades. This man's gallant actions saved his comrades lives and is deserving of special recognition." (Awarded 2 November 1917)