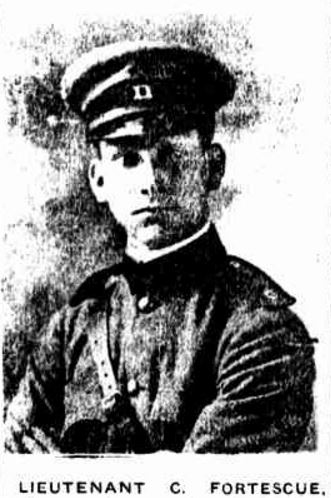 Also named on Order of Oddfellows Queen of the South Lodge Honour Roll.

Charles Fortescue landed at Gallipoli on 25 April 1915. He was wounded in action in May and evacuated to Malta, re-joining his unit in Egypt in January 1916. In March he transferred to the newly-raised 49th Battalion with the rank of Captain and embarked for France. In September he was wounded but stayed with his unit. He was wounded again in March 1917 but again ‘remained on duty.’ In September 1918 he was appointed Major. He returned to Australia in December and was discharged in February 1919, aged 25.

Military Cross citation: “From the 25th to the 29th of April 1915, during operations near Gaba Tepe, for conspicuous gallantry. He twice led charges against the enemy and rendered good service in collecting reinforcements and organising stragglers.” (Awarded 3 June 1915)

Distinguished Service Order citation: “For conspicuous gallantry in action. He commanded his company with the greatest courage and skill. Later, although wounded, he really assisted in defeating several enemy counterattacks. He showed a splendid example of coolness and initiative to his men.” (Awarded 19 April 1917)