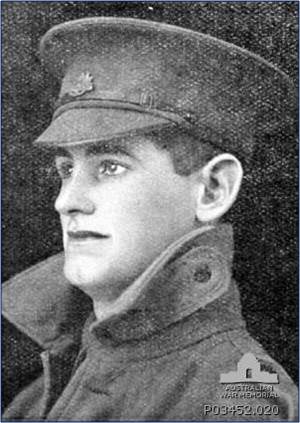 Charles Wonderley arrived in France in July 1917 and transferred to the 47th Battalion. In September at Polygon Wood (where he earned his Military Medal) he was shot in his left leg and hand and hospitalised in England. In February 1918 he returned to France and, following training at the Australian Corps Gas School, re-joined his unit on 5 April. He was killed in action the same day. He was 23. His effects were consigned to his mother aboard SS Barunga which was torpedoed. Fortunately all hands were saved, but all cargo was lost.

Military Medal citation: "North of Polygon Wood on the night 30th September/1st October 1917. As a scout he repeatedly visited the front line on Sector and also inspected all areas both right and left checking the lines of enemy barrage and reconnoitring all places possible of access. He acted as guide to the relieving Battalion and reconnoitering parties and had to frequently pass through heavy enemy shelling. His work was most valuable and he was ever ready to do anything required of him." (Awarded 17 July 1917)