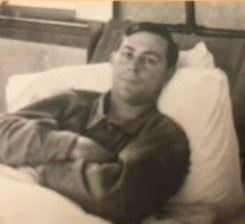 Ernest Smith transferred to the 47th Battalion in England in October 1916 and arrived with his new unit in France in October. In Belgium on April 12 1917 he was severely wounded in action at Messines with gun shots to both legs. After a week in hospital at Wimereaux he was evacuated to Suffolk Ampton Hospital where he stayed for six months (see photo). He was repatriated to Australian in April 1918.