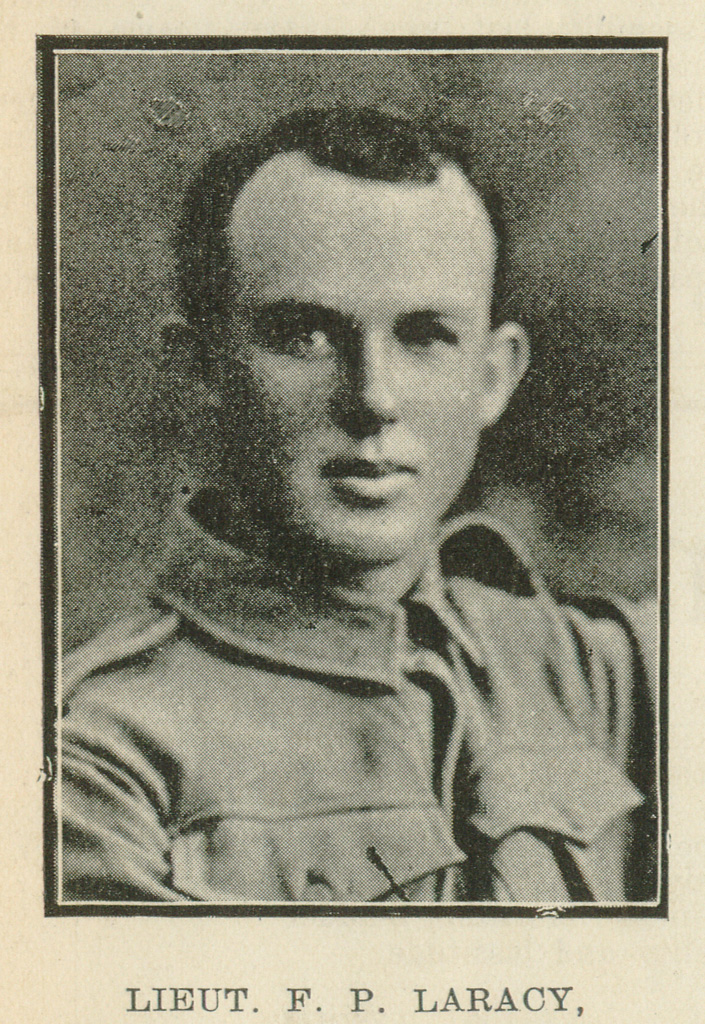 Cousin of 3820 Private Edward Joseph Laracy (DOD) and 2835 Private Thomas Laracy (not on Roll of Honour).

Lieutenant Francis Laracy was wounded in action at Gallipoli in May 1915 and hospitalised in Egypt. In November 1916 he was wounded in France and transferred to England. In July 1918 he was wounded for a third time and sent to a hospital in England. In October while returning to England from leave in Ireland aboard RMS Leinster, the ship was torpedoed by a German submarine and sank with the loss of 565 soldiers, sailors, airmen, nurses and civilians, including Francis Laracy. He was an only son. Five days later he was posthumously awarded the Military Cross. (The U-boat was later sunk in a minefield with its entire crew while attempting to return to Germany.)

Military Cross citation: "For conspicuous gallantry and leadership. With a small patrol of four other ranks he surprised and captured various enemy posts, capturing twenty eight prisoners and four machine guns. He then reported the situation to his company commander, and, during the main operation that followed, he rendered assistance in cooperation by making a further advance, capturing seven prisoners and a machine gun. With the aid of reinforcements he then linked up with the unit on his right, while the position gained was consolidated. Thanks to his splendid patrol work, valuable ground was won with slight casualties and with considerable loss to the enemy." (Awarded 15 October 1918)