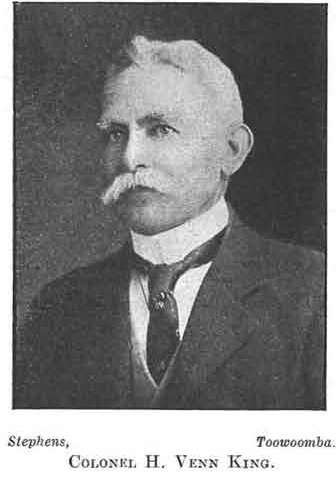 Henry Venn King, grazier and colliery owner, had been an officer with the colonial-era Darling Downs Mounted Infantry volunteers since 1889. After Federation he was appointed Lieutenant-Colonel commanding Toowoomba’s 14th Regiment Australian Light Horse. In August 1914 he was appointed Assistant Director of Remounts for Queensland to acquire 300 horses suitable for artillery and light transport. In September 1915 he was commissioned Colonel in command of the 2nd Remount Unit and arrived in Egypt in December. He commanded about 500 officers and other ranks with responsibility for thousands of horses. In March 1916 his unit was reduced by half and merged with the similarly halved 1st Remounts to create a single unit known as the Remount Depot led by Colonel Duncan McLeash. He returned to Australia and his appointment was terminated in June.