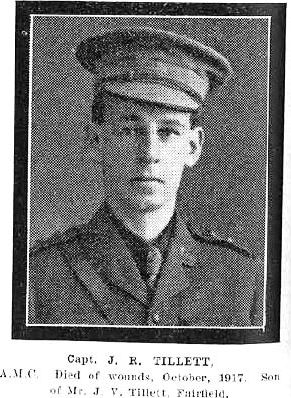 John Tillett was a doctor at Toowoomba General Hospital when he enlisted with the Australian Army Medical Corps. He arrived in France from England in May 1917. In June he was attached as Regimental Medical Officer to the 7th Australian Field Artillery Battalion. On 25 September he was wounded in a gas attack at Dickebusch in Belgium and evacuated to the 10th Casualty Clearing Station where he died from mustard gas poisoning a week later. He had just turned 24.

In January 1918 he was posthumously Mentioned in Despatches “for distinguished and gallant services and devotion to duty in the field.”