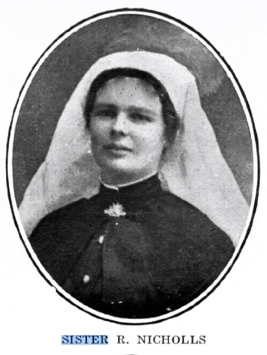 Ruby Nicholls enlisted with the Australian Army Nursing Service in June 1915 and intended to embark in October with No 1 Australian General Hospital Special Reinforcements but was kept ashore in Melbourne as ‘not medically fit to continue the voyage’. She eventually embarked for Egypt in November where she was posted to No 2 Australian General Hospital at Gehzirah, Cairo. More than 600 casualties arrived on her first day. In June 1916 she was sent on “temporary duty” to the 13th Stationary General Hospital at Boulogne, France, a specialist British unit for eye, face and jaw injuries. In April 1917 she developed enteritis and was hospitalised in London before being invalided to Australia in July.

She was Matron of St George General Hospital from January 1919 to April 1921.