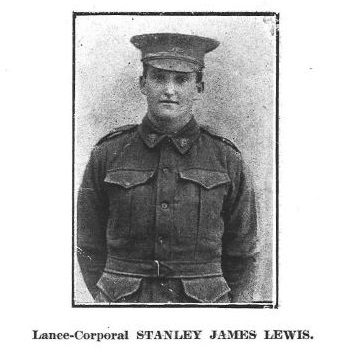 Stanley Lewis arrived in France in May 1916. In November he was hospitalised at Amiens with trench feet and he returned to his unit in January 1917. In Belgium in October his bravery at the battle of Broodseinde Ridge earned him the Military Medal. Ten weeks later was killed in action near Ypres.

Military Medal citation: "At Broodseinde Ridge east of Ypres on 10th October 1917, on being relieved in the front line, Private Lewis's platoon were caught in an enemy barrage and suffered many casualties. Despite the fact that a little further onwards was comparatively safe, Private Lewis remained behind and rendered First Aid to his wounded comrades after which he carried them to the dressing station. His coolness and great courage were magnificent. Throughout the whole operation the good work and cheery disposition of this soldier had a splendid influence over the men of his Company." (Awarded 27 June 1918)