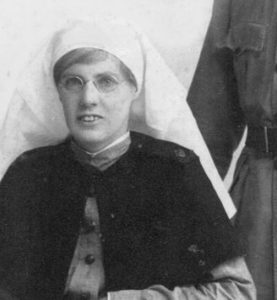 Violet Stirling joined the Australian Army Nursing Service at Enoggera Military Hospital, Brisbane, in May 1917 and embarked two weeks later for Salonika in northern Greece. After 18 months nursing British soldiers in huge tent hospitals she was granted leave in England, then nursed at the Australian Army Hospital at Dartford and was promoted to Sister. She returned to Australia in October 1919.