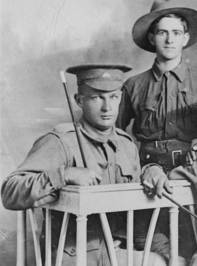 In April 1916 Walter Allom transferred to the newly-raised 49th Battalion and arrived in France in June. In September he was severely wounded at the battle of Mouquet Farm and evacuated to a Casualty Clearing Station, then transferred to the 4th Australian General Hospital at Camiers. He died of his wounds nine days later.