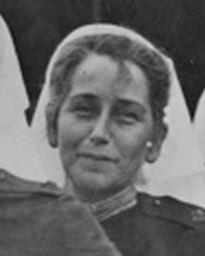 Name on ROH: I. WARNER

Annie Warner joined the Australian Army Nursing Service at Enoggera Military Hospital, Brisbane, in April 1916. In December she enlisted and embarked with AANS Reinforcements and arrived in France in March 1917. She was posted to the 25th British General Hospital at Hardelot-Plage and promoted to Sister. She returned to Australia in April 1919.